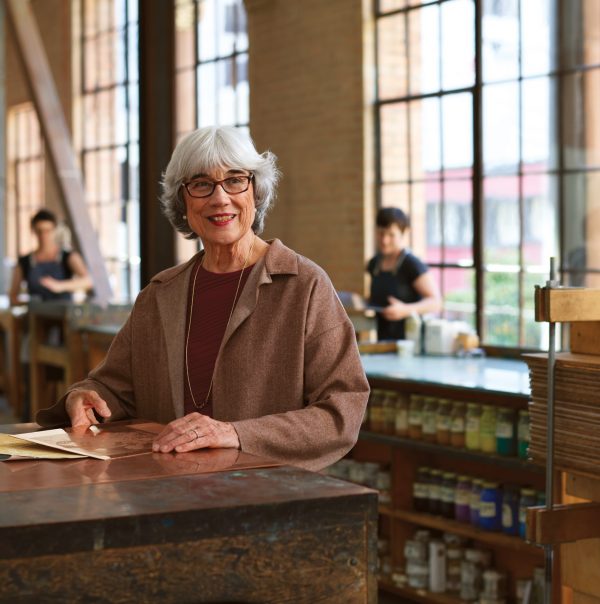 Kathan Brown, with her then-husband Jeryl Parker, founded Crown Point Press in 1962 in a storefront space in Richmond, California, across the bay from San Francisco. The couple had met while both were studying etching in London, and in 1962 were living in a flat behind the store with their year-old son Kevin. Kathan had brought an etching press from London to San Francisco on a freighter, and Jeryl had built most of the workshop furniture. He was teaching etching at the California College of the Arts, and Kathan ran Crown Point, holding workshops and classes. In 1964 she produced The Ocean’s Warning to the Skin Diver, a livre d’artiste of her own etchings with poetry by Judson Jerome, a college friend. She had admired books of this type in the British Museum in her school days.

Later that year, 1964, Kathan and Kevin moved into a house in Berkeley. Kathan and Jeryl had separated, but he helped install Crown Point in the above ground basement of the house, where it remained for seven years. Kathan held classes and workshops there, and in 1966 began teaching etching at the San Francisco Art Institute, which she continued to do, part-time, until 1974.

In the seven years that Crown Point Press was in Kathan’s Berkeley home, she produced and published seven hand made livres d’artiste: Richard Diebenkorn’s 41 Etchings Drypoints, 1965; Wayne Thiebaud’s Delights, 1965; Beth Van Hoesen’s The Nude Man, 1965; Fred Martin’s Beulah Land, 1966, and his Log of the Sun Ship,1967; Bruce Conner’s The Dennis Hopper One-Man Show, Volume I, 1971; and Serenade, 1967, a second book of Kathan’s own etchings. She worked as a typist when funds were low.

Kathan and Jeryl’s son Kevin spent time with his father, but essentially grew up in the etching studio. He assisted with printing and photoetching at Crown Point over the years, and when the press moved he took over the basement studio for his own bookbinding business, though he was still in high school. As an adult, Kevin heads the Powis Parker Company, a bookbinding-related business with many more employees than are at Crown Point Press.

In 1971 New York print publisher Bob Feldman of Parasol Press sent Sol LeWitt to Crown Point for a project. LeWitt worked in the basement studio, but later that year Brice Marden, also sent by Parasol, worked in a newly rented loft space in Oakland. Kathan and two newly hired employees, Patricia Branstead and Gwen Gugell, former students of hers, worked with Marden to produce a portfolio titled Ten Days. Later in 1972, Chuck Close spent two months in the Oakland studio making his large mezzotint Keith. Near the end of that same year Kathan, on behalf of Parasol Press, spent a week in Germany helping Agnes Martin oversee proofing of On a Clear Day, her project in silkscreen at Domberger Editions.

Kathan Brown and Tom Marioni met in 1974 and married in 1983. In 1976 they took a trip to Mexico with Kathan’s son Kevin and Tom’s son Tony. The trip was designed around an art project of Kathan’s, a commercially printed book (not a livre d’artiste) titled Voyage to the Cities of the Dawn that contains her photos along with her writing and narratives by the two young boys.

Between 1975 and 1981 Kathan and Tom together produced five issues of VISION, an unconventional art journal published by Crown Point Press and edited by Tom Marioni. VISION’s most unconventional issue is Number 4, 1980, Word of Mouth, a set of phonograph records of short talks presented by artists who traveled to the island of Ponape in the Pacific Ocean for a conference. (Click here to read an article from the New York Times, 1980, about Word of Mouth.)

In 1977, the year the Crown Point price list begins, Kathan cut back on the number of projects she did for Parasol Press, took a seminar in business management, and re-started Crown Point’s own print publishing program. Richard Diebenkorn had moved from the Bay Area to Los Angeles, but he returned, on Kathan’s invitation, to do a project in 1977 and continued to work at the press frequently until his death in 1993. In January, 1978, John Cage made his first etchings at Crown Point Press. He returned nearly every January until he died in 1992. Those two very different, inventive artists set the tone for Crown Point’s publications over the following years.

In 1978 John Cage was the first artist featured in View, a series of interviews with Crown Point published artists. Kathan edited the interviews, which were conducted by Robin White in the early years and by Constance Lewallen after 1988.

In 1981 Crown Point opened a street-level gallery space in Oakland downstairs from the press, and in 1983, Karen McCready, who lived in New York, opened the Crown Point Gallery there. It closed about a decade later in 1994. Karen subsequently created her own gallery in New York and represented Crown Point along with other print publishers. To the sorrow of all who knew her, Karen McCready died in 2000 at the age of 54. Since then, Crown Point’s sales program has been centered in its gallery in San Francisco.

At the twentieth anniversary of Crown Point Press in 1982, with the press still in Oakland, Kathan began a new program: taking artists to Japan to create watercolor woodcuts with traditional printer Tadashi Toda. Hidekatsu Takada, a Crown Point printer born in Kyoto, made this project possible. By the time it ended in 1989, seventeen Crown Point artists had worked with Toda in Japan. In 1987 Kathan instigated a similar project in China, and in the three years between 1987 and 1989 she took seven artists to Beijing or Shanghai to use an even older woodcut technique in state-run studios. In this period Crown Point also briefly carried out a stencil-printing project called Crown Point Pure Silk in which artists designed pajamas, robes, and kimonos.

The woodcut projects and the silk project ran concurrently with etching projects, always Crown Point’s main focus. Kathan moved the press from Oakland to San Francisco in 1986 after renting an industrial loft space on Folsom Street and renovating it into a gallery and spacious studio.

In fifteen seconds on October 17, 1989, the Loma Prieta earthquake devastated the press’s three-year-old San Francisco quarters. A year later on October 20, 1990, Crown Point Press settled into a three-story brick building built in 1922 in San Francisco’s South of Market district. Kathan Brown was able to buy that building, thanks to the support of Crown Point’s artists and clients. The earthquake also set in motion the acquisition of archives of Crown Point’s work by the Fine Arts Museums of San Francisco in 1991 and by the National Gallery in Washington D. C. in 1996.

The Crown Point building is L-shaped and at first Crown Point Press occupied all three of its floors. Kathan now describes herself in this period as having had “delusions of grandeur.” Since the end of 1993 Crown Point has been comfortable with its gallery, bookstore, and workshop on the top floor with a fine restaurant and two galleries on the lower two floors. Crown Point’s entrance is at 20 Hawthorne, around the corner from the Howard Street entrance to the San Francisco Museum of Modern Art.

Valerie Wade joined Crown Point Press in 1988, just before the earthquake, and now is director and partner. Her contribution, which includes overseeing many artist projects as well the entire sales program, is invaluable. Kathan supervises the press’s finances and some of the artist projects. As she has done since the late 1970s, she shoots and edits video of artists working in the Crown Point studio.

Since 1992, Kathan Brown and Tom Marioni have been living in San Francisco, walking distance from the press. Kathan’s son Kevin, with his family, lives in the Berkeley house where Crown Point spent its formative years.

In 2004 Crown Point Press published Kathan’s book The North Pole, which contains her photographs and writing; she considers it an artwork of her own. In general, however, her writing is about printmaking. In 1992 Crown Point published a paperback handbook called Ink, Paper, Metal, Wood, How to Recognize Contemporary Artists’ Prints that Kathan wrote in conjunction with a traveling exhibition. The handbook (still in print) led Chronicle Books to publish, in 1996, Kathan’s illustrated hardback book titled Ink, Paper, Metal, Wood (now out of print). Ink, Paper, Metal, Wood is also a 45-minute film. Click here to order the handbook and here for the DVD.

In 2006 Crown Point Press published Magical Secrets about Thinking Creatively: The Art of Etching and the Truth of Life, Kathan’s introductory volume (out of print) to a series of three Magical Secrets step-by-step books (still available) that illustrate and describe in detail the techniques of line etching, aquatint, and chine colle as they are used at Crown Point. Kathan edited the technical books, written by Crown Point master printers Catherine Brooks, Emily York, and Brian Shure.